Student of the Month Program Honorees 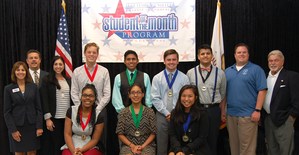 September ‘Student of the Month’ Honorees:

Effrain Bonilla Caudillo—Effrain is an AVID student, varsity soccer player, and member of the Entrepreneur Club. He is actively investigating colleges and universities of interest. Effrain’s major is undeclared, as he says, “Because everything is interesting!” A life lesson learned while at LHS is that building relationships with teachers is essential to overcoming social or academic apprehensions in order to excel.

Luz Memije—Ms. Memije has a passion for math and science, or S.T.E.M. education. She wants to pursue bioengineering or space engineering. Her dream is admittance to Stanford University. A life lesson is paying it forward; she has overcome traumatizing events during early childhood, transforming adversity into a passion for learning and school success. Her AVID program has supported her and enabled her to rise to the top of her class through persistence and humility. She plans to devote her career to guiding families in overcoming traumatic events, as one who has also been there.

Coby Chatwin—Mr. Chatwin is a campus leader and pacesetter. He serves on ASB, link crew, and is a student scholar-athlete, currently in basketball. He doesn’t view obstacles as setbacks, as evidenced by a football injury which ended his playing years, but opened the door to assisting the varsity football coaching staff. His college of choice is Point Loma Nazarene, where he plans to study business and law.

Tiffany Jeong—M. Jeong is involved in ASB, NHS, and is the Student Health Academy VP. Her career goal is to become a plastic surgeon. To prepare, she is researching several elite colleges, and plans to major in biological sciences. Determined to round her high school experience by trying out for the JV tennis team, at first she did not make the cut; then, after working on her game, she was admitted, and has since become a successful varsity singles and doubles player. She considers the science of life and healing arts a beautiful and poetic pursuit, transforming lives through a physician’s care.

Omar Quezada—Mr. Quezada discovered his serious affinity for school studies while at Ortega HS. He credits alternative school for transforming and maturing someone who underestimated his own academic abilities, into a confident learner. His interests range from careers in nursing and law enforcement, to film production. He believes OHS has given him the ability to reach his goals, including attaining a college degree. He is a winner of the Good Citizenship Award, sponsored by the Riverside County Bar Association.

David Murray—Mr. Murray is NHS president, an AVID Program student, and a scholar-athlete. His passion has been EHS’s ‘Relay for Life’ campaign, in which he personally walked over 40 miles to earn the most miles walked for two years in a row. He is recognized as a natural leader, both on campus and while participating in extracurricular activities. Though his college and university choices are still open, David plans to pursue sociology or biology, with the goal of becoming a college professor.

Ajanee Evans—Ms. Evans is a veteran of EHS’s elite Academic Decathlon team, ranking among the top three teams at County, earning an invitation to compete in Sacramento. She aspires to become a veterinarian, and has set her sights on UCSD, UC Davis, or Becker. She credits Rotary Club’s youth leadership program, RYLA, for shaping her social skills and sense of humor, while overcoming shyness.